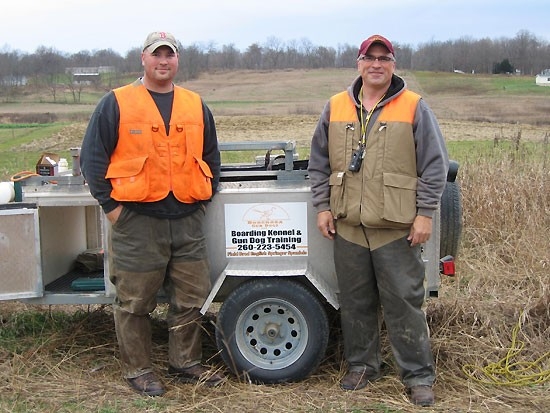 Boberosa Gun Dogs LLC is owned and operated by the Knipper family.

The journey began in 1983 with our dad Bob Knipper when he acquired his first Springer Spaniel named Corky after his childhood years of training English Setters and Beagles. Dad then started his first kennel Cedar Creek Kennels located in Leo, Indiana shortly after.

Corky was from the show end of the English Springer Spaniel but hunted everything from ducks, pheasant, grouse, quail, doves and geese. Dad learned early the versatility of the Springer. From the small Cedar Creek hobby kennel he raised several litters of puppies with Corky as the sire and placed several great hunting dogs in family homes. Dad's education of the Springer breed grew and he soon realized that there was a second line of English Springer Spaniels. That's when Dad met Mike Osborn a local guy who had some Field Bred English Springer's of his own. Soon he had his first field bred Springer puppy. Dad learned to train his new Springer at Turtle Creek Kennels with Marilyn Watson.

Over the next few years our family tagged along with that new Springer every weekend as dad learned the ropes. While dad was learning the ropes he started Little Turtle Kennels in 1988 with Mike Osborn and they began training bird dogs of all breeds professionally.

In 1994 Mike had made the switch to pointing breeds and Bob was raising his Springers and was training all breeds of bird dogs when he built a new training kennel called Country Wind Kennels. This new kennel was only 8 indoor and outdoor runs where he kept his personal gun dogs and a few customer dogs. His new partners were his sons Jared and Dustin where I began my dog training journey.

Over the next few years we trained dogs and bred some nice litters. Dustin fell away from the dog training and I went off to college. Dad continued to train dogs and had a few litters in the next years, but we just needed more room. Once college was finished my dad and I found a way to purchase a larger piece of land and we named it the Boberosa, after dad's childhood love of the television show Bonanza and their ranch the Ponderosa.

With a new piece of ground and new kennel name we began building the new kennel. The new kennel was completed and the grand opening was in January 2007.